Keb’ Mo’ is a blues singer, a Grammy Award winning blues singer. Like most blues singers he writes songs that are unpretentious, down to earth. Songs like the one named above.

Question: Very interesting, Carl, but what does that have to do with my financial plan?

Answer: It might have a lot to do with it. Keep reading.

“College-Educated Women Are Moving Away From GOP.” This was the title of a piece recently published in the Wall Street Journal, citing a WSJ/NBC News poll. According to the poll women, and especially college-educated women favor Democratic control of the next Congress by a wide (32%) margin. I don’t suppose anyone would challenge the notion that women’s voices are being heard today, more than in the past. Well, that fact could determine which major political party sets our national agenda in the coming years. The question for investors is how and to what extent this will affect the values of stocks, bonds, real estate, cash, etc. The answer is that the increasing power of women WILL affect the values of certain stocks, bonds, etc. Precisely how is an unknown for now, but investors should recognize the influence of this world changing voting block.

Sometimes we sell certain assets in order to take advantage of tax-deductible capital losses. Even though the bull market that began in 2009 has continued in 2017 we do have some assets which have lost value. Not many, and not much, but some. So, if you are a client of Financial Planning Associates, Inc., and if some of your positions have been sold recently this is the likely reason. We wanted you to be a little happier when you do your taxes.

Google’s voice-generating AI is now indistinguishable from humans. That’s right. Google’s technology is now capable of producing speech that sounds human. Don’t believe it? Click the link, scroll down a bit and listen to two quotes about George Washington. One quote is a human voice. One is computer generated.

I have posted information in the past about some of the errors that tend to inhabit the thinking of humankind. Examples of thinking errors that can adversely affect investors include overconfidence, hindsight bias, short-term focus and regret, among others. We are also subject to visual misperceptions. I recently experienced the ambiguous cylinder illusion. It has to do with “sqircles”. If you have not seen this before you will be amazed! Even after searching for and viewing the YouTube video which shows and explains why and how this works I’m still amazed. Sometimes we just cannot believe what we see. Our thinking makes assumptions which may not be true. View this amazing video here.

And finally, a couple of thoughts to ponder.

Years ago I read the book, The Road Less Traveled, by M. Scott Peck, M.D. In this book he offered some of his views concerning life’s difficulties. I have remembered many of his ideas, including the idea that what is amazing is not that bad things happen, but that good things happen! This is a profound, and positive thought.

Dr. Seuss, the famous writer of children’s poems has expressed a similarly positive perspective with the simple quote shown below. 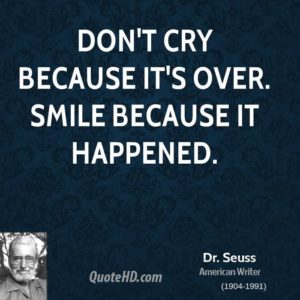 PS. Here’s to a happy and healthy new year for you and yours!