First a bit about safer cars. If you have read my blog posts you know that I expect transportation to change dramatically during the next 5 to10 years. I expect costs to be substantially reduced. I have mentioned the Uber effect. I have mentioned my niece in Chicago who uses Uber to get around town. I was with her recently, and she pointed out that she and her husband routinely get an Uber ride to work. It typically costs her $3 each way to get to and from work. They used to own two cars. Today they own only one car.

When I model my clients’ cash flows throughout their lifetimes I assume that periodically they must write rather large checks to purchase new vehicles. In addition, they must pay the regular costs associated with owning and operating their cars. They must pay for gasoline, oil, tires, batteries, repairs, insurance and perhaps parking. Automation is going to change the transportation model in many ways, including the costs associated with insurance, as shown in a piece that was published recently in the Wall Street Journal.

The title of the piece is Driverless Cars Threaten to Crash Insurers’ Earnings. In it the author points out that automobile insurers are concerned that $160,000,000,000 in premium income could vanish during the coming years as a result of increased safety made possible by removing the driver errors. That’s 160 billion dollars not being paid each year for auto insurance by motorists! The primary question among insurers is how soon this will happen and whether they should begin lowering their premiums now based on improved safety as a result of existing semi-autonomous technologies. Liberty Mutual is already giving discounts for vehicles equipped with automatic emergency braking.

As I see the world, automation, including self-driving technologies contributes to an economy that is unlikely to experience significant inflation. It also may contribute to slower growth in corporate earnings, as may be the case with automobile insurers. Of course, few aspects of life in the 21st century are simple, and economies are certainly not simple. Nonetheless, we have here a good example of the deflationary effect of automation in our time. (Apologies to my friend and economics consultant, Dr. Thomas Eyssell who might disagree with some  of what I have said in this blog post. Perhaps I’ll give him an opportunity to rebut at a later time. Probably not.) So, in part due to automation we continue to experience slow economic growth and low inflation. And low interest rates.

Lower transportation costs are good for commuters, but is there a downside? Yes, perhaps many. One has been mentioned here before, but I would like to re-visit it briefly now. It has to do with pensions.

And a problem with pensions. Another recent WSJ piece entitled Why Pensions’ Last Defense Is Eroding points out that “…Long-term returns for U.S. public pensions are expected to drop to the lowest level ever recorded…Those long-term returns have dropped below expectations due in large part to two recessions over the past 15 years and a sustained period of low interest rates…” One takeaway from this information is that the number of employers offering traditional defined benefit pension plans and/or the benefit levels offered will likely continue to drop. In their stead employers will offer defined contribution plans, such as the cash balance pension and the 401k/profit-sharing plan.

The decline in defined benefit pensions is one more example of a rapidly changing world, which requires skill, and perhaps some luck to navigate. Workers today cannot count on their employer to manage their retirement income.

And finally, a study by scholars at the University of California, San Diego found that dogs showed jealous behaviors when their owners displayed affection toward an animatronic stuffed dog that barked, whined and wagged its tail. The dogs snapped at and pushed against the stuffed dog and tried to get between it and the human. 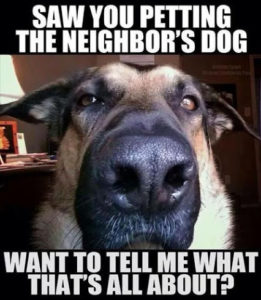